Kia Rondo gets a turn in the torture chamber

Graeme Fletcher | Feb 23, 2013
Graeme Fletcher/National PostAfter it was tested in the extreme cold, the Kia Rondo was completely stripped and evidence of wear was minimal. 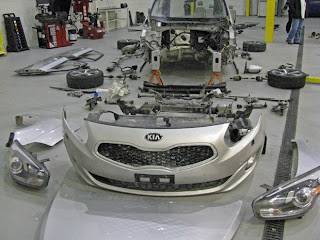 Many toy manufacturers brag about their latest products being indestructible — they are when tested by adults, but put them in the hands of a child, and things get pear-shaped in a hurry. Having raised four girls, I can attest to the torture Barbie after Barbie received at their young hands —everything from being buried in the name of research to being hurled out of a bedroom window and landing under the tire of a passing truck. Sadly, that particular Barbie was DOA when I finally retrieved it.


Likewise, how many times have you had to reboot your computer, new or otherwise? Imagine having to do the same to your new car on an annoyingly frequent basis. We are, after all, talking about the second largest investment most consumers ever make. It is for this very reason, and, of course, to protect the maker from excessive warranty claims, that durability testing is such an important part of the development process regardless of manufacturer. 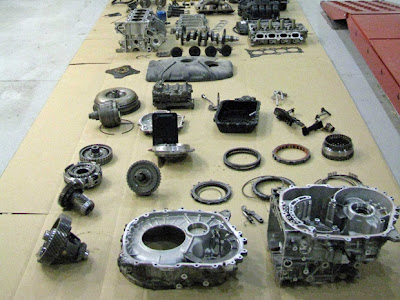 
The First Shift: Kia blows away at the Chicago Auto Show


Preview: Kia Forte is quick to impress for 2014
Everything from crash safety and performance to comfort and dependability has to be tested and evaluated. It is an extensive routine that’s conducted to ensure that when the newbie reaches market, it will function as intended. Remember, the average automobile is comprised of around 20,000 parts (or more)— the list runs from the bolts and rivets that hold things together, the stampings welded together to form the body and the wires in the wiring harness to light bulbs, seats, audio equipment and even the pointer on the speedometer. Then there’s the engine, transmission and sundry other drivetrain components. All have to be manufactured, assembled and then work as one for the life of the car, which, in the extreme, can mean being driven for 300,000 kilometres or more.

The validation process involves scorching the subject in places like Death Valley and then freezing them in some far-flung cold weather test facility. Although these conditions are beyond the extremes most cars will never see, every new car has to be subjected to them over and over until it passes muster.

It’s extremely rare for a manufacturerto lift the curtain and show what goes on behind the scenes, but that’s exactly what Kia did by allowing me to examine a 2014 Rondo following the durability and cold weather testing conducted here in Canada. Yes, it had been tested in other parts of the world before arriving in Canada, but as it is going to be a Canadian-only model (as in not sold in the U. S.), it had to be tested in our climate to validate what had been learned in the initial testing phase.


Between September 2012 and January 2013, the Rondo was tested in the wilds of Quebec for a distance of 100,000 kilometres. It was then subjected to severe cold weather testing in Alma and Quebec City, where the temperatures at the time ranged from a high of -16C to a frosty low of -35C. It was here the heater and defroster systems were evaluated, as were the cold start characteristics and brakes — the latter for performance and feel under these severe conditions. Finally, the engineers checked the Rondo for the noise, vibration and harshness that typically arrives with frigid weather — trim squeaks, oval tires and frozen windows all show up as the temperature plummets. Left unchecked, these small items combine to cast an unfavourable shadow over the entire vehicle regardless of how well it is designed and built.


It is remarkable what Kia has accomplished in a very short period of time —two of the three worst cars I have ever tested belonged to Kia. The Lada Sagona was the absolute worst, but the original body-on-frame Sportageand the Sephia sedan were not too far behind.


After all of the testing, the Rondo was returned to Kia’s head office and completely stripped — and I mean completely stripped. Only the wiring harness remained in the body. Everything else was taken apart and examined for wear and tear. Remarkably, after examining each and every component only one was returned to Korea for further evaluation — a small plastic trim piece.


The wear evident in the engine’s vital components was remarkably small. The pistons and rings were in good shape and the block showed virtually no sign of wear. In fact, salt stains on the engine cover a side, it was difficult to tell the engine had been pushed to the extreme.


The transmission was in the same condition. The fluid was clean and the clutches that are subjected to enormous stress under normal conditions were pristine. Little wonder then that other manufacturers are beginning to use this transmission — it is the six-speed automatic found in the Dodge Dart.


Graeme Fletcher/National PostEngine wear was minimal - the pistons and rings were in good shape and the block showed virtually no wear..


While all manufacturers conduct the same sort of testing, precious few ever let a journalist or mechanic poke around — I enjoyed playing snoop for a day. It is remarkable what Kia has accomplished in a very short period of time — two of the three worst cars I have ever tested belonged to Kia. The Lada Sagona was the absolute worst, but the original body-on-frame Sportage and the Sephia sedan were not too far behind. That was then.


Today, it’s a very different story thanks to the sharp designs being penned by styling chief Peter Schreyer, the smart engineering practices evident in every facet and the rigorous testing that goes on behind the scenes. The work has produced an enviable portfolio where, Sedona aside, the oldest ride in Kia’s line up is the current Sportage, and it is in its prime.